What makes our vegetarian Fable Mushroom Burger seem so much like a pulled brisket burger? Picture this: a world where you can enjoy the mouth-wateringly delicious flavour of pulled brisket in a way that’s sustainable, ethical and completely meat-free.

Sound like a fairytale? We’re here to tell you it isn’t thanks to our impossibly meaty vegetarian Fable Mushroom Burger. Here’s what makes it taste so damn good.

It starts with umami…

If you’ve ever had a hankering for the savoury taste of beef, you were really craving what’s known as ‘umami’.

Umami is one of the five basic tastes and it’s what makes cooked meat taste so, well, meaty. The word ‘umami’ comes from Japan, where the flavour is so prized that it actually roughly translates to ‘deliciousness’.

Aside from beef and other meats, umami flavour is also particularly strong in foods like soy sauce, ripe tomatoes, Parmesan cheese, anchovies, and – you guessed it – mushrooms.

Mushrooms (especially shiitake mushrooms) are rich sources of umami flavour thanks to guanylate, a naturally occurring sodium salt. That’s why mushrooms are often used to create vegetarian dishes that can hold their own next to their meaty counterparts. Case in point: our Fable Mushroom Burger.

…and then there’s the geniuses over at Fable

So we went hunting for some folks who know their stuff, and that’s how we found Fable.

Fable is an Aussie company dedicated to producing meat alternatives that have a great taste without the harm of animals.

The Fable began with a vegetarian and two mushroom geeks, each on a journey to make meat-like products for plant lovers. They stumbled upon a wise mushroom farmer who disclosed to them the ancient magic of the mushroom. Their incredible nutrition, meaty texture and flavour, and ability to cure disease and restore gut flora were just some of the extraordinary things they discovered.

From that point on, mushrooms were the name of the game for team Fable. In fact, two-thirds of Fable’s ingredient list comes from shiitake mushrooms (helloooo, umami) – and they’re our secret weapons in creating vegetarian burgers that taste just like the real thing.

So, are you ready to join the vego revolution without sacrificing the irresistible flavour of meat?

Our Fable Mushroom Burger is crafted with a pulled brisket-style mushroom patty made from shiitake mushrooms and a short list of natural plant-based ingredients. You’ll also find Swiss cheese, lettuce, tomato, onion and aioli, all wrapped up in our signature burger bun.

It might sound too good to be true, but these delectable burgers are far from fabled. Try it for yourself at Ribs & Burgers Neutral Bay or a location near you. 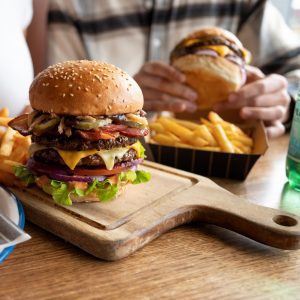