No meat... No worries. R&B launches plant based burgers in Australia

Ribs & Burgers now offers two new burgers which cater to those who want to swap out their legendary beef patties for a plant-based substitute that doesn’t taste like cardboard.

The Beyond Burger Patty contains 20 grams of plant-based protein, is made from peas, and even “bleeds” just like the real thing. It’s still cooked the proper way: on the flame grill, though health-conscious burger lovers will be pleased to learn that it contains zero cholesterol.

“The collaboration with Beyond Meat is a brilliant example of food and flavour innovation – it has replicated the taste and texture of meat, but is 100% plant based,” says Ribs & Burgers Food Manager, Etienne Lubbe.

The Beyond Burger is the world’s only burger that looks, cooks, and tastes like ground beef from cows, but is made entirely from plants. It’s even produced without the use of GMOs, soy, or gluten, and packs more protein and iron than beef, but with less saturated and total fat.

“Whilst the ‘Ribs & Burgers beyond’ menu has been designed in response to the worldwide trend towards plant-based diets, the flavour combination and texture ensures it will appeal to even the most dedicated meat lover,” continued Lubbe.

Based in Los Angeles, California, Beyond Meat is a privately held company with a mission of building meat directly from plants and since its inception in 2009, has taken the world by storm, attracting investors including Bill Gates, Leonardo DiCaprio, Twitter co- founders Biz Stone and Evan Williams, Kleiner Perkins, former McDonald’s CEO Don Thompson, Honest Tea founder Seth Goldman, Humane Society of the United States, and Tyson Foods, amongst others. 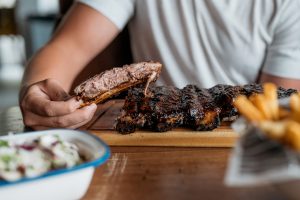